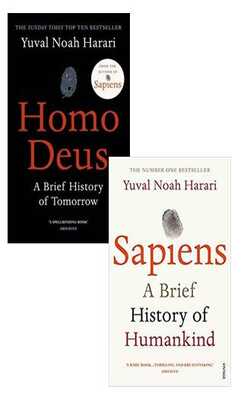 Seller: BookChor
Dispatch Time : 1-3 working days
1. Sapiens A Brief History of Humankind:-Sapiens: A Brief History of Humankind is a book by Yuval Noah Harari, first published in Hebrew in Israel in 2011 based on a series of lectures Harari taught at The Hebrew University of Jerusalem, and in English in 2014.
2. Homo Deus A Brief History of Tomorrow:-Yuval Noah Harari envisions a near future in which we face a new set of challenges. Homo Deus explores the projects, dreams and nightmares that will shape the twenty-first century and beyond - from overcoming death to creating artificial life.