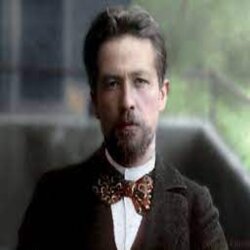 When I think back on my childhood, Chekhov recalled, it all seems quite gloomy to me. His early years were shadowed by his fathers tyranny, religious fanaticism, and long nights in the store, which was open from five in the morning till midnight. He attended a school for Greek boys in Taganrog (1867-68) and Taganrog grammar school (1868-79). The family was forced to move to Moscow following his fathers bankruptcy. At the age of 16, Chekhov became independent and remained for some time alone in his native town, supporting himself through private tutoring.

In 1879 Chekhov entered the Moscow University Medical School. While in the school, he began to publish hundreds of comic short stories to support himself and his mother, sisters and brothers. His publisher at this period was Nicholas Leikin, owner of the St. Petersburg journal Oskolki (splinters). His subjects were silly social situations, marital problems, farcical encounters between husbands, wives, mistresses, and lovers, whims of young women, of whom Chekhov had not much knowledge â€“ the author was was shy with women even after his marriage. His works appeared in St. Petersburg daily papers, Peterburskaia gazeta from 1885, and Novoe vremia from 1886.

Chekhovs first novel, Nenunzhaya pobeda (1882), set in Hungary, parodied the novels of the popular Hungarian writer MÃ³r JÃ³kai. As a politician JÃ³kai was also mocked for his ideological optimism. By 1886 Chekhov had gained a wide fame as a writer. His second full-length novel, The Shooting Party, was translated into English in 1926. Agatha Christie used its characters and atmosphere in her mystery novel The Murder of Roger Ackroyd (1926).

Chekhov graduated in 1884, and practiced medicine until 1892. In 1886 Chekhov met H.S. Suvorin, who invited him to become a regular contributor for the St. Petersburg daily Novoe vremya. His friendship with Suvorin ended in 1898 because of his objections to the anti-Dreyfus campaingn conducted by paper. But during these years Chechov developed his concept of the dispassionate, non-judgemental author. He outlined his program in a letter to his brother Aleksandr: 1. Absence of lengthy verbiage of political-social-economic nature; 2. total objectivity; 3. truthful descriptions of persons and objects; 4. extreme brevity; 5. audacity and originality; flee the stereotype; 6. compassion.

Chekhovs fist book of stories (1886) was a success, and gradually he became a full-time writer. The authors refusal to join the ranks of social critics arose the wrath of liberal and radical intellitentsia and he was criticized for dealing with serious social and moral questions, but avoiding giving answers. However, he was defended by such leading writers as Leo Tolstoy and Nikolai Leskov. Im not a liberal, or a conservative, or a gradualist, or a monk, or an indifferentist. I should like to be a free artist and thats all... Chekhov said in 1888.

The failure of his play The Wood Demon (1889) and problems with his novel made Chekhov to withdraw from literature for a period. In 1890 he travelled across Siberia to remote prison island, Sakhalin. There he conducted a detailed census of some 10,000 convicts and settlers condemned to live their lives on that harsh island. Chekhov hoped to use the results of his research for his doctoral dissertation. It is probable that hard conditions on the island also worsened his own physical condition. Read Less